The patience and art of weaving a village

Reading about and thinking of the fascinating and important work of our action researchers in Northern Ireland, Serbia, Austria and Hungary, an amazing encounter came to mind: a meeting with a small woman of great worth, the Sardinian artist Maria Lai.

I was very fortunate to meet Maria Lai in her home-atelier, in Ulassai two years before she died in 2013, at 93 years old. I was travelling with my family for a month on the island of Sardinia, where we tried to see as many of its treasures as we could, both dead and living, including its musicians, writers and artists.

The first reason why this encounter made such a strong impression on me was her home-atelier, a magical space where she and other women who were supporting her, created her art works, often physically huge art works, despite her small proportions. Her proportion reminded me in fact of one of the Sardinian mythical figure of jana, a little fairy.

The second reason was the quality and magic of her work: I had never seen anything like it before. Everything was impregnated with meaning, as if coming from the very heart of the world. Many works were done by weaving, linking past and present, tradition and innovation, history and myth, craft and concept. Books were sewn with her own hands out of every imaginable material, from paper to bread, ceramic and fabric. Both weaving and sewing were used as metaphors for connection and relation.

I think I can talk of these impressions for very long, so let me go back, before getting lost, to our action research sites, especially the action in the little Hungarian village “Kisvaros” and why thinking of it reminded me of Maria Lai.

In the village our Hungarian researchers have spoken of silence and enmities between different people, of a fragmented community, and have tried in all ways possible to understand, to break the silence, and to propose a different way of living together. Sometimes this has given hope, sometimes despair. The story I am about to tell goes to them.

Tied to the mountain

During my visit to the museum of Maria Lai in in Ulassai, a gift she made to her village, I saw a video of one of her early works, called Legarsi alla montagna (Tied to the Mountain), performed in 1981.

This work was inspired by a previous request by the authorities for a war memorial, which Maria Lai had originally declined on the grounds that she did not want to make a work for the dead but for the living. This answer and refusal prompted in turn a reflection that resulted in a counterproposal, made a year later, when she was given full freedom to proceed with her idea.

The art work, which was to take place in Ulassai, had to achieve two things, according to 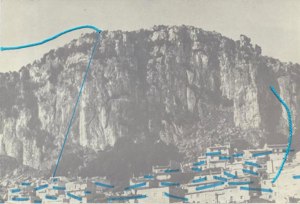 the intentions of the artists: give back something to the place, and involve its inhabitants.

She started talking to people and her imagination was caught by a legend told by the elders to the children. The legend of the blue ribbon tells of a little girl saved from falling out of a cave thanks to a blue ribbon which she held on to and took her away, flying in the sky.

The legend seemed to have been caused by a real event when a piece of the mountain fell down in 1861 and caused a tragedy in the village. This seemed to the artist a good enough starting point for working on the idea of a shared collective identity.

The ribbon cloth seemed to have been donated by some of the people, and women were said to have been the ones to cooperate more easily in the action. During the day of the action, she asked the inhabitants to tie the long blue ribbon from house to house. It became clear during that process that some people were in enmity with each other. A way was found to represent this by putting colorful cloth, tie nodes and hang loafs of bread where there was friendship, and nothing when there was none.

As they tied the village both in a real and metaphorical way, Maria Lai reminded that friendships were rare and people usually keep distance from one another, as they are affected by drama and various tensions going on among each other. This action nevertheless made everyone participate in the endeavor collectively.

When the action ended, all the houses were also tied up to the mountain nearby, in itself a symbol of life but also a symbol of death, in order to make peace with it.

This art work raised important questions on the sense of a community, on its common past, but also on its future, on a way for people to live together. The magic vision of the salvaged little girl became a metaphor for imagining the collective future, made of bonds, sentiments, and relationships that are vital even though they might not be easy.